Green gas airsoft is a mixture of silicone oil and compressed propane, which is used as a propellant in gas-powered airsoft guns. In this article, we provide clear and detailed answers for those who want to know what is green gas airsoft and how it works.

How does a Green Gas Airsoft Gun Work?

Green gas airsoft guns are fitted with a small nozzle or valves through which the magazines are filled. Gas-powered or pneumatic airsoft guns function by releasing a valve-operated bottled gas such as green gas, CO2, nitrogen, propane, and red gas.

Although note that the use of red gas is illegal in the United States. In fact, it is regarded as a Class II substance, which depletes the ozone layer of the atmosphere.

Furthermore, in places where red gas is not frowned at, it is recommended that it should be used only if an airsoft gun has been modified to accept such substances. Otherwise, it may damage your airsoft gun. So instead of using red gas, go for other high-pressure gases such as green gas, nitrogen, and CO2. 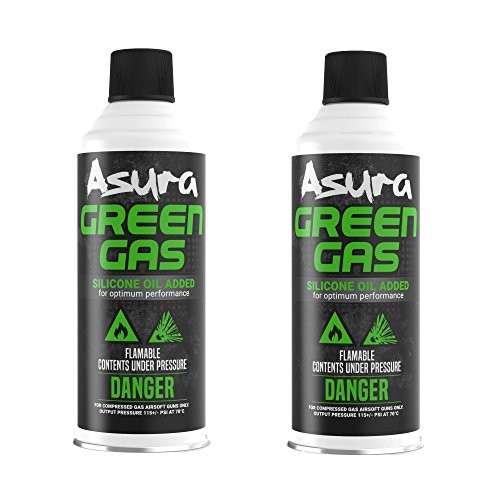 Most airsoft players agree that green gas-powered airsoft guns are better than their CO2 counterparts in terms of speed, accuracy, impact, affordability, and durability. A bottle of the gas can provide a minimum shot of 1500 pellets, while CO2 offers way less. This is quite a high standard considering the price.

Most airsoft players prefer to get the pre-made mix, while few go for the adapter option, which provides a propane tank for refilling the airsoft gun.

On the other hand, CO2 airsoft guns are powered by carbon dioxide, which is readily available, just like green gas. CO2 gas is fed into an airsoft cartridge, which is available at online and local stores.

It is super affordable, so don’t fret! When you fill-up the cartridge, it can offer you at least 50 shots. Just like green gas airsoft guns, CO2 cartridges can be inserted into the grip or magazine of your rifle.

But if you want a pocket-friendly airsoft gun, green gas is the way to go. It also offers more rate-of-fire than CO2 airsoft pistols. So depending on what you want in an airsoft gun, go for either one of them.

What do I Need to Know about Green Gas/Propane in Airsoft Guns?

Green gas and propane are both flammable, so it is not advisable to release or ignite them close to a fire source.

Fuel propane smells like mercaptan, so it can be easily detected if there is a leak. Green gas and fuel propane are packed with different scents by different brands for easy identification. However, pure propane barely smells.

Green gas is lubricated, unlike propane. But, propane adapters are designed to easy filling up of the gun’s magazine.

The University of Toronto analyzed three different green gas brands using a mass spectrometer/gas chromatograph, and it was discovered that they were all nothing more but propane.

In light of the above, you may be at a crossroads for which one to go for. The thing is, domestic compressed propane is quite cheaper and safer than green gas.

Also, do not use green gas or propane for airsoft guns that are not engineered for high-pressure gases such as the un-upgraded Western Arms GBBs. These guns are designed specifically for low-pressure gas, and that’s not propane or green gas.

Lastly, green gas and propane airsoft guns are designed for intermediate to professional airsoft players because the operating mechanism may take some time before beginners can get used to it. So if you are a beginner airsoft player, we advise you to stick with spring-powered airsoft guns.

Green gas is gotten from a mixture of silicone oil and compressed propane. It is used for powering airsoft guns that come with gas tanks and cartridges. An airsoft gun powered by green gas is very accurate, fast, and realistic.

If you are new to the game of airsoft, we do not recommend green gas airsoft guns for you.

Airsoft green gas is dangerous because it contains propane which is a non-toxic in gaseous form. It is also dangerous if excess quantity is inhaled. The victim suffocates because the airs in the lungs is displaced by propane. But inhaling the quantity of propane that will cause suffocation can only happen in an industrial area and not with the minute quantity that airsoft guns require.

Another source of concern for many airsoft players is that propane is highly flammable.

How Long Does Green Gas Last in Airsoft Gun?

The length of time green gas will last in an airsoft gun depends on the gas capacity, type of gun, ambient temperature, and magazine size. The KWA M9 and Glock 23 airsoft guns both have large magazines, but they will be emptied in just 2 rounds.

Under a temperature of 18 degrees Celsius during the winter, the KWA TM 1911 airsoft gun, which has a thin magazine will do a full mag. However, in summer, the shots will increase. Firing at a fast rate will lower the gas pressure and cause the gun not to cycle completely.

Green gas, which is composed of propane does not smell. For this reason, mercaptan odorants are added to propane to make it leak detectable. Different green gas bottling companies use different odorants to facilitate leak detection. So, bottled green gas does not have a specific smell.

Fuel propane, just like gaseous propane is usually packed with mercaptan, so it is quite difficult to distinguish between both of them.

Can You Use Lighter Gas for Airsoft?

Putting lighter gas into an airsoft gun rather than getting the recommended gas is not a good idea. This is because lighter gas is almost the same as butane, which is flammable at low pressures. Even though lighter gas is cheap and readily available, using it in airsoft weapons is a recipe for disaster.

Instead of using lighter gas, go for green gas or CO2 to get optimum performance from the airsoft gun. These gases are susceptible to minimal wear and thus last longer.

Green gas can be used in a CO2-powered airsoft gun because they have similar pressures. CO2 airsoft guns are slightly heavier than green gas guns because they come with springs. But note that only the latest set of CO2 guns can be powered with green gas because older ones were not designed to accommodate higher pressures.

The KJW M9A1 airsoft gun is designed for CO2 and green gas magazines. Even though both magazines will cycle the KJW M9A1 seamlessly, the overall lifespan of the gun will be reduce if it is not used with a specific cycle.

Where Do You Store Green Gas?

Green gas can be stored in a garage, especially if it is in large quantity. This is because the major constituent of green gas is propane and it is flammable. Green gas airsoft gun manufacturer’s advice customers to always store the product outside to avoid human inhalation, which can cause severe lung damage.

Even when storing green gas in a garage, it is advisable to place it close to a window, so that any leaks can evaporate into the atmosphere and not diffuse to every corner of the garage.

We have affiliate relationships with the providers (Amazon, Clickbank, etc) of the products, goods and services that are linked to on this page and may be compensated when you buy. But do note that it doesn't increase the cost of the products to you in any way or determine our verdict on a product/service.

We use cookies on our website to give you the most relevant experience by remembering your preferences and repeat visits. By clicking “Accept All”, you consent to the use of ALL the cookies. However, you may visit "Cookie Settings" to provide a controlled consent.
Cookie SettingsAccept All
Manage consent

This website uses cookies to improve your experience while you navigate through the website. Out of these cookies, the cookies that are categorized as necessary are stored on your browser as they are essential for the working of basic functionalities of the website. We also use third-party cookies that help us analyze and understand how you use this website. These cookies will be stored in your browser only with your consent. You also have the option to opt-out of these cookies. But opting out of some of these cookies may have an effect on your browsing experience.
Necessary Always Enabled
Necessary cookies are absolutely essential for the website to function properly. This category only includes cookies that ensures basic functionalities and security features of the website. These cookies do not store any personal information.
Non-necessary
Any cookies that may not be particularly necessary for the website to function and is used specifically to collect user personal data via analytics, ads, other embedded contents are termed as non-necessary cookies. It is mandatory to procure user consent prior to running these cookies on your website.
SAVE & ACCEPT